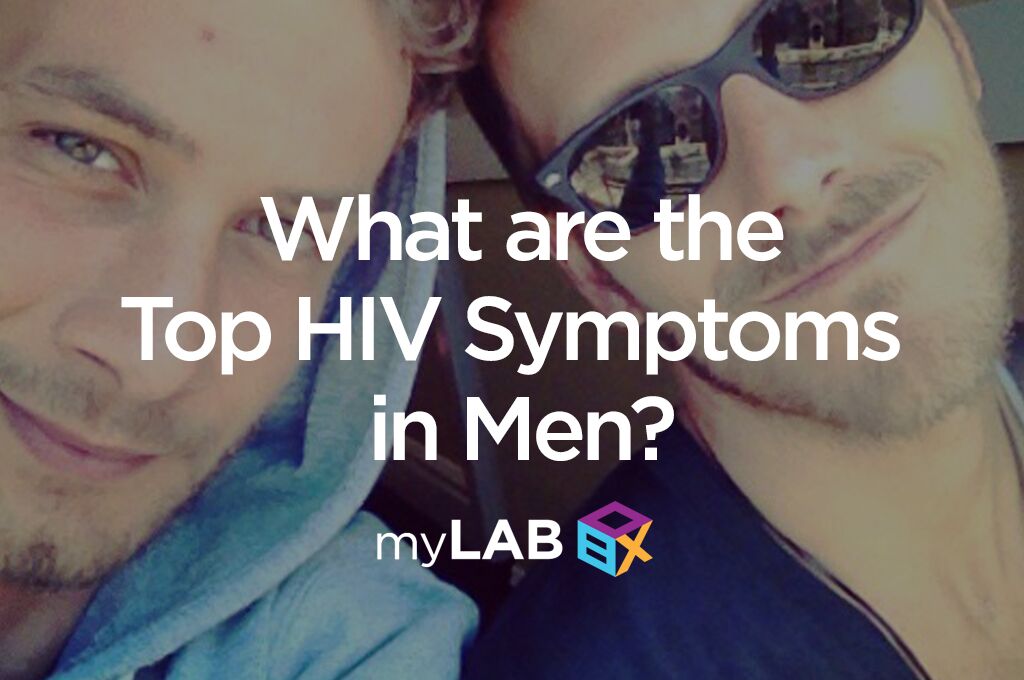 Human Immunodeficiency Virus (HIV) is on the rise in the United States, so today we’ll be examining the HIV symptoms in men.

According to the Centers for Disease Control and Prevention (CDC), over one million Americans are living with HIV, the virus that can lead to Acquired Immunodeficiency Syndrome (AIDS). During 2015, women made up roughly 19% of all HIV diagnoses within the United States.

Last week, we reviewed the top HIV symptoms in women, now it’s the men’s turn. While HIV can affect anyone, regardless of race, gender, or sexual orientation, the frequency of the infection among the male population is alarmingly high.

HIV is a virus that attacks the body’s immune system, damaging the carrier’s ability to fight off infections. It can be passed from person to person through contact with infected bodily fluids. This includes blood, semen, and vaginal fluids.

A common cause of the infection tends to be unprotected sex with an infected partner. Unlike many other viruses, there is no cure for HIV. Once you contract it, you have it for life.

Fortunately, treatment is significantly more advanced nowadays than it was even a few years ago,. With proper treatment and medical care, HIV can be controlled. Those living with this infection can live a happy and healthy life.

In general, the HIV infection follows a similar pattern in men and women:

During this initial phase, it may take a couple of weeks for HIV symptoms in men to become visible. For 80 percent of infected people, the first symptoms appear within two-to-four weeks and often resemble the flu.

The most common symptoms may include:

Of course, that’s assuming the symptoms are even visible at all. Many people with HIV may not see symptoms for several years. The only way to truly know for sure whether or not you have HIV is to get tested.

Once the first phase ends, the initial HIV symptoms in men will completely disappear. You may go for years without seeing another symptom. That doesn’t mean you’re in the clear!

During this seemingly dormant stage, the virus is actually replicating within your body. Though you don’t feel sick, the virus is still actively weakening your immune system. This deceptive nature of HIV is a key reason why regular STD testing is imperative. It isn’t enough to get tested a single time. You must remain vigilant about keeping your body safe.

During the last stage of the infection, your immune system is severely damaged, making you more vulnerable to opportunistic infections. If you’ve detected the infection by this point, treatment will greatly improve your ability to live a normal lifestyle.

Otherwise, standard “run of the mill” illnesses can become life threatening. With a weakened immune system, you may notice that you frequently get colds, flus, and fungal infections and have a harder time fighting them off.

During this stage, you might experience the following AIDS symptoms:

Hormone treatments and therapies can alleviate certain HIV symptoms in men. In some cases, HIV-positive men can find relief through long-term testosterone replacement.

Additionally, hypogonadism symptoms can be easily confused with less serious ailments like anemia and minor injuries in the testes. However, it can also be indicative of more damaging problems – including sterility and undetected infections.

Seeking treatment as soon as possible is the best course of action, so getting tested often is crucial for anyone who is sexually active or may otherwise contract HIV.

Taking a self-administered HIV test at home is a quick, easy way to ease your mind and address your symptoms immediately. As with most health concerns, early action is crucial for addressing HIV symptoms in men.

Regardless of your income or current state of health, there are many reasons to take at-home HIV tests as soon as possible.

While it’s possible to get screened through a licensed medical provider, those tests often come with a catch.

Getting tested at the doctor’s office could cause your insurance premium to increase, and your data may be reviewed for future claims or medical procedures. Taking an at-home test keeps your results confidential, and there is no need to notify your insurance company.

Additionally, if you don’t have insurance, at-home testing is typically more affordable than comparable in-office options. Plus, you don’t have to worry about transportation costs, copays, or additional fees.

Getting an STD test in a public medical office can be embarrassing, nerve wrecking, and simply uncomfortable.  Opting for an at-home HIV test protects your privacy, while making the whole process as painless as possible.

At-home testing is discreet, affordable, and easy to access to anyone – no matter where you live. Across the board, it’s the simplest way to take care of HIV symptoms in men.

HIV Does Not Discriminate

For men who have sex with men, the statistics can be especially sobering, as this is a group of people that is most affected by this virus. One in six members of this demographic will be diagnosed with HIV. However, the stigma that HIV is a “gay” disease is old and tired. This infection does not discriminate. Everyone is at risk, regardless of age, race or sexual orientation. So please, don’t think you’re immune.  Letting your guard down only puts you at more risk.  The CDC recommends that all sexually active adults between the ages of 18 and 65 should be routinely screened for HIV. Be smart about your health and take the potential risks like HIV seriously.

The Best Prevention: Getting Tested

There isn’t a cure for HIV. However, getting treatment early can slow the progression of the disease and significantly improve your quality of life. A recent study found that people with HIV might have a near-normal life expectancy, as long as they begin treatment before their immune systems are too severely damaged.

The best ways to prevent HIV infection are relatively simple:

Using a condom during any sex act can seriously reduce the possibility of contracting or spreading HIV.

Get Tested for HIV Regularly

Getting tested is the only way to know whether or not you have HIV. The CDC recommends that all adults, from ages 18 to 65, are be routinely screened for HIV.

There are a variety of affordable ways to get tested. You can get tested for free from qualified clinics, or if your tests are covered by your insurance. However, since your medical records would become available to your insurance company, that could lead to increased costs later on.

If you want to avoid the doctor’s office altogether, you can order an at-home HIV testing package from myLAB Box. These tests offer lab-certified results that can be checked discreetly online. Early treatment can also help men with HIV to reduce their risk of accidentally passing the infection to their partners.

PrEP and HIV prevention go hand-in-hand. This once-a-day pill is perfect for people who are HIV-negative, but are at high risk. PrEP blocks the enzyme known as “HIV reverse transcriptase.” Basically, it prevents an HIV infection from spreading. Often, partners of people who are HIV positive take this medication as a way of preventing them from contracting the infection.  This daily regimen can reduce the risk of an infection by up to 92%.

Gay men are at higher risk of getting HIV

The association of homosexuality with HIV might create uneasiness around discussing symptoms of HIV in men. Between our society’s struggle to accept different sexual orientations and the perceived severity of an HIV infection, bringing this topic up is tough.

Statistics show that men who have sex with other men (MSM) are at a significantly higher risk of getting HIV than any other group in the US. Compared to the general population (with a 1 in 99 chance of getting HIV), one in six MSM will be diagnosed with HIV.* Furthermore, there’s a remarkable disparity between different ethnic groups among MSM: 1 in 2 black MSM, 1 in 4 Latino MSM, and 1 in 11 white MSM will receive an HIV diagnosis.*

But you don’t have to be gay to get HIV

It’s important to be aware of risk factors for HIV and take extra measures for safety if you are part of high-risk groups. However, anyone can get HIV, even those who aren’t ‘high risk’. Over 1.2 million people in the US have HIV; the CDC estimates that 51% of Americans aged 13-24 who have HIV don’t know they have it.**

Check out our STD symptoms guide to familiarize yourself with the signs of an HIV infection, and remember: The only way to know if you have HIV is to get tested.

(Read: 5 Things you should know before going to the HIV clinic)

Why you should talk about it

HIV has long been a stigmatized illness–something believed to be reserved for gay men, drug addicts, and socially marginalized groups. HIV is something that anyone of any race, sexual orientation, or class can get, and the only way to change the stigma is to talk about it.

Luckily, medical advancements have come a long way. HIV is no longer the death sentence it was once thought to be. In fact, there are several known ways to help prevent the transmission of HIV. Medications like PReP make it much more possible for people with HIV to be in a relationship without affecting their partner. Often, partners of people who are HIV positive take this once-a-day pill as a way of avoiding contraction of the infection.  This daily regimen can reduce the risk of an infection by up to 92%. Using a latex or polyurethane condom every time you have sex is another way to protect yourself. That said, condoms do not always protect against STDs and HIV. Taking control of your health by using these preventative measures can reduce your risk of contracting HIV. However, routine testing is critical for all of us. Since you may not experience any detectable symptoms even if you are positive, you’ll never know your status for sure unless you are tested regularly, and after every new sexual encounter.  This is the only way to truly know your status.

How to talk about it