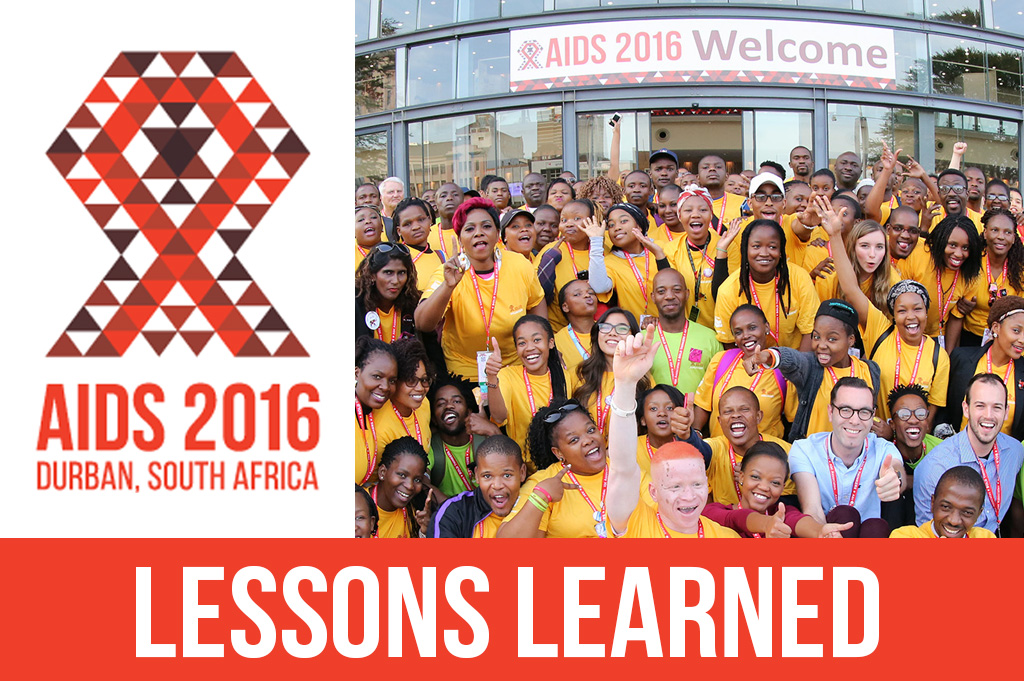 As the 2016 International AIDS Conference (AIDS 2016) wrapped up, we took a step back to appreciate the broader points. AIDS affects over two million people worldwide, with more cases popping up every day. The South African-based conference extensively discussed medical advancements, industry news, prevention and treatment, as well as plans for eradicating the disease once and for all.

An emphasis was also placed on societal response to the disease, and the impact that stigma and discrimination have on individuals who have HIV/AIDS or are making the decision on whether to get tested.

The Two Most Important Takeaways from AIDS 2016:

1) We learned that while there isn’t a full AIDS cure, doctors are making steady progress. A small trial of an HIV vaccine is being rolled out later this year throughout South Africa. According to this story in Fortune, researchers hope the vaccine will one day provide 60% protection against HIV.

2) PrEP has shown to be very effective in preventing HIV… but a high price tag, combined with a general lack of access and information, is still keeping it out of the hands of the general public. You can read about this powerful treatment here.

Charlize Theron gave an impassioned speech to open the event. When it comes to Africa’s AIDS epidemic, she says it all.

Charlize Theron: Not enough is being done for AIDS epidemic: 'It's time we face the truth' https://t.co/JqVHYYCOSQ pic.twitter.com/sc7GRlcbOa

Here’s a direct link to Theron’s speech. It is certainly worth a watch:

Prince Harry was on hand to continue his mother Diana’s work. His HIV awareness campaign is producing fabulous results. At the conference, he urged people to get tested and to fight the stigma associated with HIV/AIDS. We couldn’t agree more!

Of course The Gates Foundation was there as well. Bill has so many important lessons to share, but this short video does a great job of summing it up.

The battle against AIDS is one we can win. I explain how in this short video: https://t.co/tmDrhZ6KEK #AIDS2016https://t.co/apMtjEjzOx

Finally, Sir Elton John was there representing his Elton John AIDS Foundation and offered support to the ideals and struggles of the International AIDS Conference.  He, along with Prince Harry and Prince Seeiso of Lesotho addressed a group of youth advocates to remind them that the future, and the potential to rid the world of AIDS, is in their hands.

"Young people are being left out & left behind in the AIDS response" –@eltonofficial. via @AIDS_conference #AIDS2016 pic.twitter.com/a6sHI9C0Hn

Here is a video of John discussing the struggles of the LBGT community and the stigma of being diagnosed with HIV.

While a few famous faces can’t totally solve the AIDS epidemic themselves, these celebrities help open the conversation to a wider audience through their advocacy. That said, it wasn’t just celebrities at AIDS 2016. Many philanthropic organizations, medical professionals and foundations were there to present critical HIV research.

There were a great deal of important breakthroughs and strategies unveiled last week. Here are just a few:

Couldn't make it to #AIDS2016 last week in Durban, South Africa? Live the experience through this AMAZING video… https://t.co/clicohIwI6

Journalist Mantoe Phakathi reminded everyone that the conference began on the birthday of HIV Advocate and Humanitarian Nelson Mandela.

#AIDS2016 opening is held on #MandelaDay to celebrate the legacy of the international icon on human rights and HIV.

For the six-year anniversary National HIV/AIDS Strategy for the United States, the White House released new data on the national response to HIV.

Learn more about new data, what is means for #NHAS2020 & our national reponse to #HIV in new @AIDSgov video →https://t.co/ETqlUbJITD

Chris Beyrer, president of the International AIDS Society, points out another positive aspect of AIDS 2016:

Chris Beyrer: For the first time the majority of speakers at the meeting are women. #AIDS2016

The National Institutes of Health announced an investment that can aid medical advancements toward a cure for AIDS.

Hopefully, we’ll have some exciting breakthroughs in the coming year. In the meantime, diligent and regular STD testing is your best plan of defense. HIV/AIDS (and really all sexually transmitted infections) need to be kept top of mind at all times if we are going to win this war.

Finally, we have two last words for you: Condom Fashion!